Aussie consumers have decided that now may not be the best time to spend as consumer confidence plummets in Melbourne amid the Stage Four restrictions. Aussie consumers have decreased in consumer confidence, with a dop in 2.1 points to 86.5. There are obvious reasons for this, mainly due to Melbourne’s lockdown restriction changes and uncertainty surrounding the pandemic.

In the ANZ-Roy Morgan Consumer Confidence report, there has been a plunge of 2.1 points, hitting 86.5 in August. 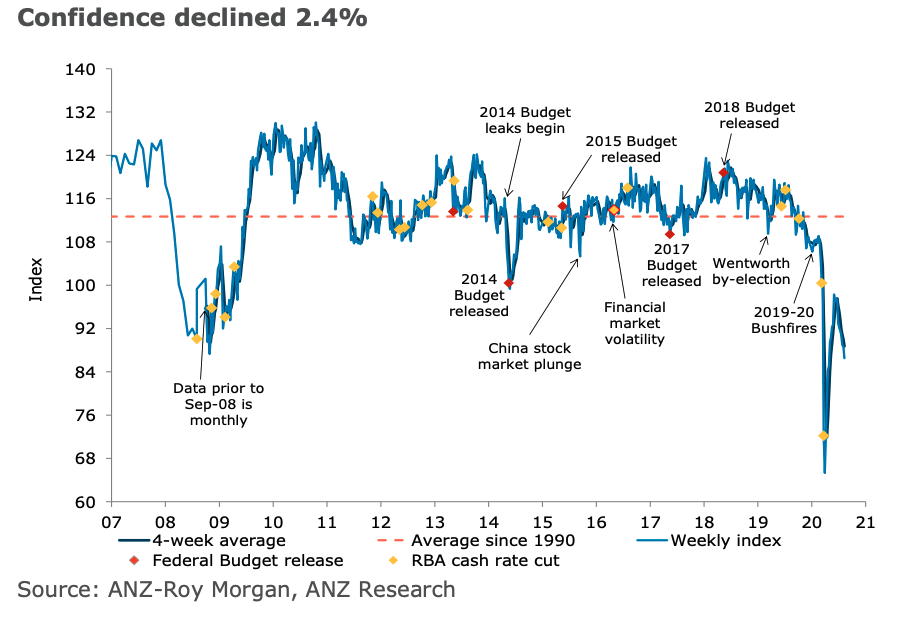 In Melbourne, there has been an expected plunge in consumer confidence, dropping 4.1 points to 81, which is the lowest of all mainland capital cities.

This is the seventh weekly decline of the continuous decline. It is now longer than the first six-week decline period at the first wave of the pandemic. However, the second decline has been less severe,  the index has fallen a bit more than 11 percent over these seven weeks compared to the 40 percent decline seen in the first wave.

“The move to Stage 4 restrictions in Melbourne put further downward pressure on sentiment last week, with confidence falling to its lowest level since the last weekend of April,” said David Plank, the ANZ Head of Australian Economics.

“Not surprisingly, confidence is weakest in Melbourne. The resilience of sentiment toward financial conditions continues to be a feature of the survey, but only in a relative sense as it is still low in absolute terms and speaks to a likely reluctance on the part of households to spend.”